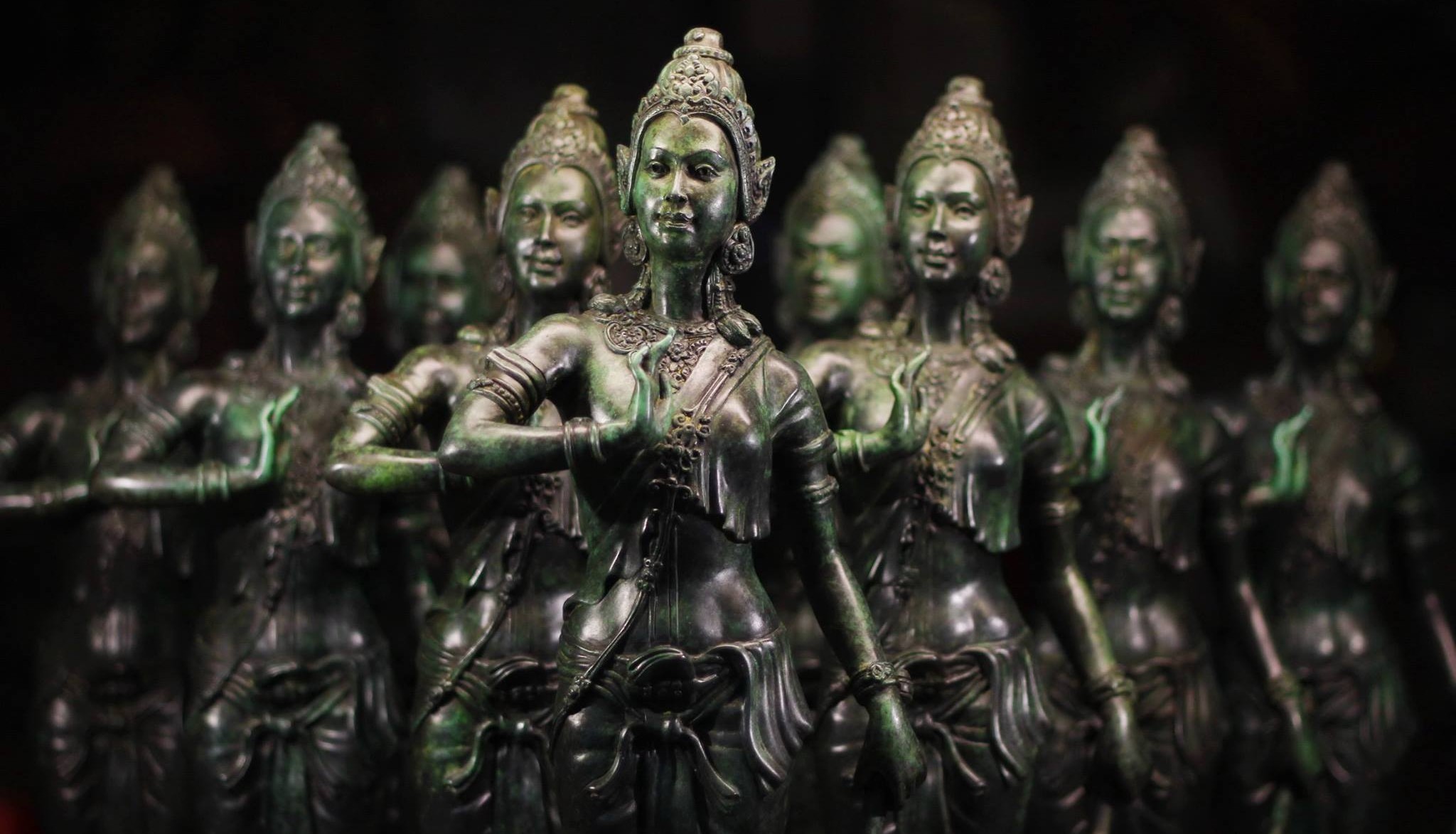 The growing popularity of bronze sculptures, handmade with all the charms of antiquity and uniqueness are durable art pieces. Different shapes both contemporary and traditional portrayal of animals, nature, and wall- art and cast bronze decorative artifacts are in demand. The work and theme on sculptures differ from artist to artist and from country to country. Each country has its own designs, traditional arts and bronze sculptures and castings vary according to regions. Collectors sculptures have a varied collection of artifacts, collected over a period of time while the Internet stores have made browsing and ordering bronze sculptures easy and fun.

The growing popularity of bronze sculptures, handmade with all the charms of antiquity and uniqueness are durable art pieces. Different shapes both contemporary and traditional portrayal of animals, nature, and wall- art and cast bronze decorative artifacts are in demand. It is said sculpting with this metal originated in China and carried forward by Greek sculptors while the Egyptians used to make small statutes and Greeks made life like statutes, decorative art, vessels and weapons.

As an alloy of copper and tin, it is harder than copper, durable, resistant to corrosion and melts easily. Historical facts state that due to wars and intense looting from the defeated kingdoms, huge amounts of bronze statues and artifacts were taken away, melted to make arms or statues by the victorious army. The sculptures of the Greek periods are very rare as the artifacts were melted down for other purposes.

However, it has always remained the popular metal as far as decorative statutes, candle stands and sculpture are created. It may be hammered, cast and carved with equal ease while it flows uniformly into a mold when heated under optimum temperatures. The outdoor decorative statues are usually preferred to be crafted in bronze due to durability, withstand extreme temperatures and have anti rust features.

To judge the superiority of a bronze sculpture may be based on the process used to create the art work and the skill of the artist. The theme can vary from wildlife, historic scenes to simple depiction of everyday life. The flow, finish and look depend on the inherent taste and experience of the artist. Sculptures can range in size and bulk depending upon your requirements.

Bronze sculptures are often copied or cast as poor fakes, so better beware of impersonators and buy from reputed sources. There are many artists and importers of bronze carvings who are professionals in their field. With high reliability and good customer policies, internet stores selling bronze statutes and sculptures are a good way to add to your collection exquisite pieces from different parts of the world.

The work and theme on sculptures differ from artist to artist and from country to country. Each country has its own designs, traditional arts and bronze sculptures and castings vary according to regions. Collectors sculptures have a varied collection of artifacts, collected over a period of time while the Internet stores have made browsing and ordering bronze sculptures easy and fun.

Bronze has nice price in the art world of sculptures. When setting in a mold, bronze will slightly expand and fill in the finest details. Several extraordinary bronze sculpture statues have been created throughout history; but because of the strength of bronze most have not been allowed to survive. Far more ancient stone and ceramic statues exist today even though they’re cracked or in fragments. Most of the larger bronze sculpture statues were melted down for weapons during times of war and lost as a part of history. The bronze alloy used both in ancient and modern time is very similar consisting of 90% copper and 10% tin.

The ancient Greeks were the first to use bronze to make life size statues. One of those antique bronze sculptures still exists. It is called “The Victorious Athlete”.

The making of bronze statue art is a extremely skilled talent. The strength of bronze permits the sculpture to make things impossible using other mediums such as stone. The look of a bronze statue or bronze sculpture gives an individual the feeling of history and longevity and it additionally makes the person to buy bronze sculpture. Every piece of the art is unique because of the creation method. The process is time consuming and needs many steps. The artist’s vision is 1st shaped in wood or clay to form a cast. The cast is then stuffed with wax to fine tune the creation and also the cast.

The wax stature is coated in a ceramic solution and covered with sand. Once toughened, the wax is then melted and the mold is strengthened due to this process. The mold is now ready for the melted bronze. Once the bronze has cooled and become solid in the mold, the cast is cracked open and thrown away. The artist then works at refining and finishing the bronze sculpture statue. A patina will be applied to immediately recreate the actual coloring method that will happen over time.

Modern Sculpture is known as a phenomenon that lasted from 1860s through the 1970s. During this period artists started breaking old norms and almost reinvented the art status of sculpture. We can mention such talented sculptors as Pablo Picasso, Peter Voulkos, George E. Ohr, and Kenneth Price as being key to this process. They created three-dimensional structures through the combination of disparate objects into a whole. They used various materials, including ceramics, clay, bronze, wood etc.

Modern sculpture as well as art in general is impacted by successive art styles like Geometric Abstraction, Cubism, De Stijl, Futurism, Dadaism, Surrealism Suprematism, Constructivism, Minimalism, Abstract Expressionism, and Pop-Art. The advent of Surrealism, for example, was significant in terms of sculpture because it led to things occasionally being described as “sculpture” that would not have been so previously, such as “involuntary sculpture” in several senses, including coulage.

Also important was the vocabulary of reduction and abstraction, which was seen throughout the 1930s and 1940s and was exemplified by artists such as Gaston Lachaise, Sir Jacob Epstein, Alberto Giacometti, Henry Moore, Julio Gonzlez, Pablo Serrano, Jacques Lipchitz at that time, and later in the century by Carl Andre and John Safer who added motion and monumentality to the themes of purity of line.

By the 1960s Abstract expressionism, Geometric abstraction and Minimalism predominated. Some works of the period are: the ‘Cubi’ works of David Smith, the large scale work of John Chamberlain, and environmental installation scale works by Mark di Suvero.

In 1967 Picasso presented his acclaimed work, “Chicago Picasso” in Chicago. It is a 50 feet high, massive, abstract bronze structure. The viewers wondered whether the subject was a bird, horse, woman, or a non-figurative abstraction. This landmark creation was an indicator of the new connection that modern sculptors felt with bronze. Another significant example was “Knife Edge – Two Piece” in 1962, erected near the House of Lords in London, by Henry Moore. The author described the phenomenon of modern sculpture: “the sensitive observer of sculpture must learn to feel the shape simply as shape, not as description or reminiscence. He must, for example, perceive an egg as a simple solid shape, quite apart from its significance as food, or from the literary idea that it will become a bird.”

Bronze sculpture has been around for a long time. Bronze enjoys considerable longevity, and it slightly expands before it sets. This allows the artist to apply the finest details to the piece. Bronze is very strong and ductile. This ductility contributes greatly to works that depict motion, especially in human and animal figure.

Modern artists use different methods to keep this art form alive and well. There are a number of discrete casting processes that have to be mastered, such as sand casting and centrifugal casting. When artists plan to create a large bronze sculpture, they usually create a miniature example of what they plan to create first. They also use a large number of measuring devices to scale the dimensions of a piece accurately.

One method to create a bronze sculpture is the lost-wax method. It is an older method, but still commonly used today. To use it, an artist sculpts the original piece in wax, wood or clay, and then spends hours or even days perfecting the desired shape of the artwork. The waxed piece is then dipped in ceramic, and then dipped in fine sand, giving the detail. It is then dipped in coarser sand which will give strength to the piece. This process is repeated until the coating reaches one quarter of an inch in thickness. The artwork is heated to one thousand five hundred degrees Fahrenheit to melt the wax and set the ceramic mold.

As we can see, bronze sculpture is very popular for excellent reasons, and may express different aspects of time and Weltanschauung.
Author: melvillejackson